Got a few minutes for a coffee break? Well, let me tell you a little bit about my son Derek.

I recently started writing Derek's story as a book and am in the process of working on it. I hope someday soon it will get published. It's a story that sounds like it has to be made up, a work of fiction. But I promise you it isn't. I first began it as a blog, and had so much positive feedback that I decided to continue it as a book. If it never happens, I will post the whole thing as a blog. You can see the first few chapters here: 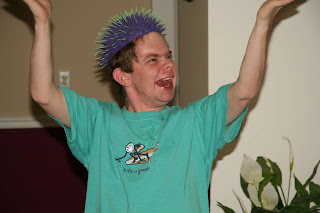 Anyway, Derek is now 35. He is my "eternal toddler", as he has a mental age of about a 5-6 year old. He is also deaf. But he is the most incredible little person. He is the happiest little guy, who never, ever has a bad day. He has a zest for living life. He is so full of love. Nothing much slows him down. We communicate with basic sign language, and for those who don't know his language, it really doesn't matter to him. He has a way of communication all his own.

There is so much to his story, way too much to tell here. But as a mother of a special needs child, I just want to encourage you to appreciate everything about your child. Appreciate the fact they are healthy. Try not to complain that they talk too much - I would give anything to hear my son speak a word, a real word. Not just sounds. Appreciate the fact that you can yell to them if they're running towards danger, and they can hear you and stop in their tracks. Cherish all the milestones they have throughout their lives, as you may not take the time to realize that these are precious gifts.

I will be sharing many stories with you, the readers, about Derek and the ups and downs we experience. Hopefully these stories will touch your hearts and even make you chuckle a time or two.

I'm Karen Cox, author of Brewed In Love. Thank you for joining me as I share with you the challenges and blessings of living life with a special-needs/medically challenged son, a computer programmer/motorcycle enthusiast husband, a married daughter, a grandson and granddaughter, a small farm of 3 cats, a dog, 9 hens, and 1 rooster. I will share my stories ~ past and present ~ to inspire you, recipes to delight you & adventures to entertain you.

So grab a cup of coffee, sit a while, and let me welcome you to my world!